Assistant Professor Kyu Young Han will use the funding to develop a new optical technology that could aid in the understanding of human protein linked to diseases. 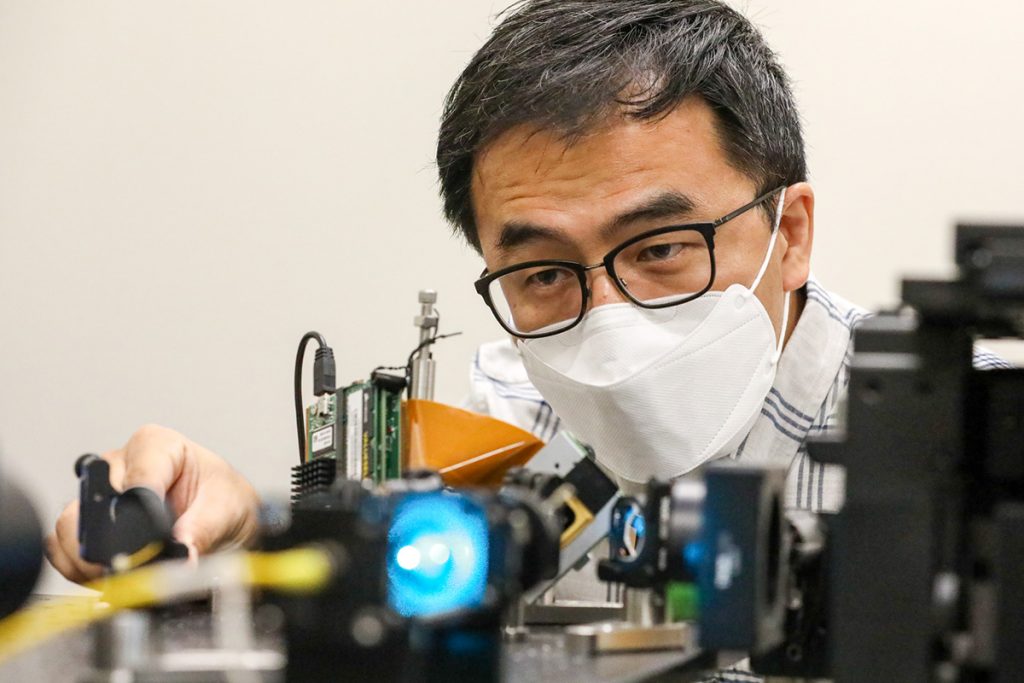 Kyu Young Han, an assistant professor in UCF’s College of Optics and Photonics, is the university’s first faculty member to be awarded the National Institutes of Health’s Maximizing Investigators’ Research Award for early stage investigators.

The five-year $1.7 million grant is intended to provide stable funding so recipients can pursue ambitious challenges, according to the National Institute of General Medical Sciences, which oversees the program.

Han, who has a doctorate in chemistry, will use the grant to develop a novel bioengineering tool and imaging system to enable researchers to image multiple proteins in a single cell under a super-resolution microscope. The current technique is extremely slow, taking weeks to months to image fewer than 20 target proteins. Han expects to be able to accomplish this with nanoscale resolution in 24 hours.

If successful, this new tool could be invaluable to researchers trying to understand key biomedical problems from diabetes to cancer because proteins are linked to so many important processes in the body. Specialized proteins play a variety of roles including biochemical reactions, the body’s immune system, scaffolding structures and regulation of metabolisms.

“That’s why I study optics,” Han says. “My background, how I got into this, is biophysics and biochemistry. I recognize the potential. It makes sense because we need to know how proteins interact with each other and the surrounding systems. We need to be able to observe those to understand all the connections.”

Han’s work aligns to the goal of the award, which is part of NIH’s Maximizing Investigator Research Awards program.

Han said he knew of college’s reputation for optics and photonics, which is why in 2016 he accepted a position at UCF. He has received several grants – including a National Science Foundation award – published several journal papers and began training students in this interdisciplinary area of research. Two of his graduate students, Jinhan Ren and Vahid Ebrahimi, will work on the NIH project.

Interdisciplinary ties are critical, he says because of the complexity of the challenge. That’s why for this NIH project he is collaborating with a neuroscientist at Rutgers University and a cell biologist at the University of Illinois.

Before joining UCF, Han worked at the Max Planck Institute in Germany where he studied super-resolution fluorescence imaging. His postdoctoral research, at the University of Illinois at Urbana-Champaign, focused on designing new optical tools for biological applications, such as studying DNA-protein interactions, RNA imaging in live-cells, and revealing nuclear structure in mammalian cells. He has one patent, which was commercialized by Leica