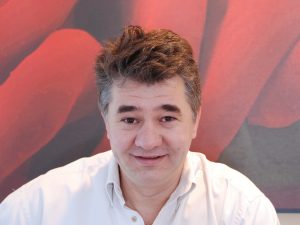 Leaving his home in Romania wasn’t something Gabriel Popescu, Ph.D ’02, ever expected to do until the opportunity presented itself. Motivated by the chance to make an impact on the world, Popescu packed his bags and left home in 1997 to pursue an American education at the CREOL, College of Optics and Photonics.

It’s been almost 25 years since that pivotal moment in Popescu’s life, and he still recalls how jarring the journey can be for someone traveling to a foreign place.

“It has been an exciting journey since I first got here,” said Popescu. “What I remember most is how overwhelming the transition was when I arrived in America. Orlando was my first introduction to the West. I recall certain things vividly… even the Florida air smelling differently and feeling differently than what I was used to.”

Popescu currently teaches at the University of Illinois at Urbana-Champaign as the William L. Everitt Distinguished Professor of Electrical and Computer Engineering, where he directs the Quantitative Light Imaging Laboratory at the Beckman Institute for Advanced Science and Technology.

Popescu and his team develop biophotonics methods for application in biomedicine; for example, using quantitative phase imaging to predict the recurrence of prostate cancer in patients. Their research is primarily broken up into three categories:  technological advancement, basic science, and clinical applications.

Other examples of research under development in Popescu’s lab are quantitative histopathology to detect breast cancer and label-free tissue scanners for colorectal cancer screening. Popescu notes that he couldn’t do it without the team effort of the students and scientists around him.

“To this day I am still using most of what I learned as a student at CREOL,” said Popescu. “I work at a large institution with many brilliant scientists. These colleagues are collaborative, which is something that I was exposed to consistently while a student at UCF and came to value greatly in other scientists. CREOL had the perfect size of 150-200 people, small enough so everybody knew everybody by name, but large enough to make a world-wide impact”

Popescu has pursued scientific endeavors ranging from research done at the Massachusetts Institute of Technology (MIT) under the late Professor Michael Feld and serving as the associate editor of Optics Express and Biomedical Optics Express.

All that research is found in over 190 authored papers that typically focus on the applications of photonics to the biological sciences and related research. He also authored a book on “quantitative phase imaging”, the area of his research and started a ten-volume book on Principles of Biophotonics, of which the first two volumes are already in print. Popescu has also given over 250 invited lectures and become a fellow of OSA, SPIE, and AIMBE.

When asked what inspires him the most, Popescu nods to his time as a student at CREOL.

“As is the case perhaps with all international students, it was challenging to take a chance coming to an unfamiliar place,” said Popescu. “I’ve had my struggles and situations to conquer, but I’ve always been grateful from the moment I became a student at CREOL. I have been trying to emulate the family-like environment in my own group ever since”