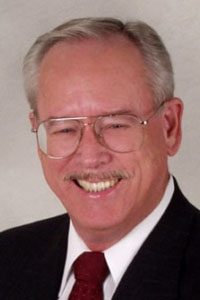 Ronald L. Phillips is an Emeritus Professor in the Department of Electrical and Computer Engineering, the Department of Mathematics and the CREOL School of Optics at the University of Central Florida, Orlando, Florida.  He was the founding Director of CREOL in 1984. He was the Founding Director of the Florida Space Institute for Florida State University System located at Kennedy Space Center.  He has held positions on the faculties of Arizona State University and University of California, San Diego.  He holds a BS in Electrical Engineering, MS in Electrical Engineering, MA in Mathematics and a Ph.D. in engineering from Arizona State University.  His research areas are propagation through random media, optical communications, laser radar and imaging through atmospheric turbulence. In 1977 the National Science Foundation awarded him a Senior NATO Postdoctoral Fellowship to work with the British Ministry of Defense and the American Society for Engineering Education awarded him the 1983 Medal for Outstanding Contributions in Research, for all academic disciplines in all engineering schools in the southeast United States. Professor Phillips has been awarded the UCF College of Engineering Outstanding Researcher of the Year in 1983 and 1985 and the University Researcher of the Year in 1985. In 1996 he was awarded the Explorer Award by the Governor of Florida for outstanding contributions to education in the space industry. In 1997 he was awarded the UCF Professional Excellence Award and the University Leadership Award for sustained leadership. He is a member of Phi Kappa Phi, all academic honor society, Tau Beta Pi engineering academic honor society and Eta Kappa Nu, the electrical engineering academic honor society. He served on the National Board of Directors of the Eta Kappa Nu for three years. 1976-1978. He is the contributing author for two books, Fiber Optic Sensors, Springer-Verlag, 1982 and Optical Waveguide Sciences, Martinus Nijhoff Publishers, 1982. He has co-authored four books on laser beam propagation through random media and co-authored one book on applied mathematics. He has published more than 85 papers in the fields of laser communications, laser beam propagation through turbulence, fluid turbulence, statistical optics and fiber optic sensors.  He has been a consultant number of agencies and companies including the U.S. Army, NASA, Boeing Corporation, General Electric, Lockheed-Martin and SAAB, Sweden.  He has served as U.S. Army representative to NATO advising on inter-operability of battlefield laser communications between NATO forces as well as a consultant to the U.S. General Accounting Office on government contract issues having to do with laser communications.  Professor Phillips has supervised 40 M.S. theses, two of which where in mathematics, and 10 Ph.D. dissertations, one of which was in mechanical engineering (in turbulence).