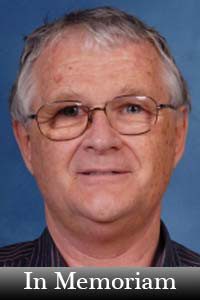 George Stegeman received his PhD from the University of Toronto and is the first recipient of the Cobb Family Chair in Optical Sciences and Engineering. The principal interest of Dr. Stegeman’s research group is the experimental study of nonlinear optics in waveguide structures, especially the properties of spatial solitons in various regions of the electromagnetic spectrum. Of particular interest are solitons in photonic crystals, in semiconductor optical amplifiers, in quasi-phase-matched doubling crystals and in the discrete systems afforded by coupled arrays of channel waveguides. He is a Fellow of the Optical Society of America and has received the Hertzberg Medal for Achievement in Physics of the Canadian Association of Physicists and the R. Woods Prize of the Optical Socity of America. Dr. Stegeman passed away on May 2, 2015, at the age of 72.