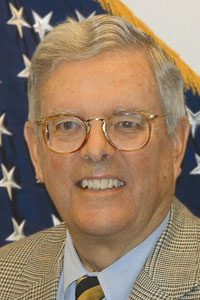 Dr. Stickley received his electrical engineering education at the University of Cincinnati, MIT, and Northeastern University. As a Lt at the Air Force Cambridge Research Laboratory he built the Air Force’s first laser in 1960 and became the Chief of the Laser Physics Branch. In 1971 he joined ARPA as Deputy Director of the Materials Sciences Office and later was promoted to Director of that office. During that period he led successful developments of windows and coating for high power IR lasers, modeling and test patterns as a means to design, understand, and monitor semiconductor IC processes, Ho and Er lasers, PtSi staring focal plane arrays, and initiated long-running ARPA programs in GaAs integrated circuits and HgCdTe focal plane array materials processing.

In 1976 he joined ERDA as the first Director of the Office of Laser Fusion where he obtained Congressional authorization of the NOV A laser at LLNL and the Particle Beam Fusion Accelerator at Sandia. In 1979 he joined the BDM Corporation as Vice President for Advanced Technology and developed a contract-supported group conducting research in optical computing, sensor protection, focal plane array assessment, and particle bed reactors. In 1990 he joined CREOL at the U of Central Florida as a Professor of Electrical Engineering and Associate Director where he helped to build this organization into a position of world-leadership in optics and laser technology.

From 1997 through 2000, he was an IPA with the AFOSR’s European Office of Aerospace Research & Development in London where he had responsibility for programs and activities in lasers, optics, and materials. In 2002, he rejoined DARPA where he has established programs in nuclear isomers, x-ray lasers, high efficiency light sources for pumping high power lasers, and microantenna arrays for millimeter wave and IR imaging. In 1974 he was named a Distinguished Alumnus of the University of Cincinnati.

In 1976 he received the Secretary of Defense Meritorious Civilian Service Award for his contributions to high power IR optics and integrated circuit process technology. In 2006, he received the Office of the Secretary of Defense Medal for Exceptional Public Service for his work at DARPA as a Program Manager, and a special award from DARPA for having established the Super High Efficiency Diode Sources (SHEDS) program to develop high efficiency diode pumps for use with high power lasers. He is a Life Fellow of the IEEE and a Fellow of Optical Society of America. He is a member of the Cosmos Club of Washington, DC.