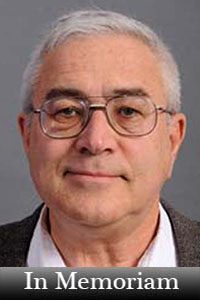 Boris Zeldovich received his Doctor of Physical and Mathematical Sciences degree from the Lebedev Physics Institute in Moscow, Russia and was a Professor of Physics at UCF. He predicted and discovered, experimentally, the giant optical nonlinearity of liquid crystals, which is 1010 times stronger than for usual media and is the co-discoverer of optical phase conjugation. He pursued both theoretical and experimental research programs on wave propagation in multimode optical waveguides and irregularly inhomogeneous media using the methods of nonlinear optics and dynamic holography for the processing of images transmitted through those media. He was a Member of the Russian Academy of Science. Dr. Zeldovich passed away on Sunday, December 16, at the age of 74.