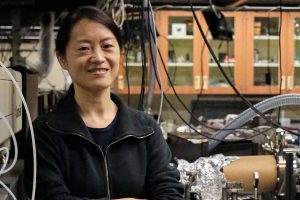 The U.S. National Science Foundation has awarded UCF a grant to purchase and install an almost $2 million high-peak-power, high-repetition-rate ultrafast infrared laser system — a first of its kind in the world.

The money is an investment in the cutting-edge research being conducted at UCF, which is advancing knowledge and technologies in physical, chemical, and planetary sciences, as well as optical engineering.

The laser will be the backbone of a multi-User Facility for Attosecond Soft x-rays and Terahertz (UFAST). This facility once complete will be one of a kind in the world and is expected to enhance U.S. competitiveness in high-flux ultrafast technologies and attosecond science.

“UFAST will provide unique and versatile tools for in-depth scientific investigations and will advance knowledge in multiple research fields that may lead to applications, such as low-cost and efficient solar panels, light-frequency electronics, new laser cutting technology, and plasma synthesis, as well as extend our understanding of our solar system,” says Li Fang, project lead and an assistant professor of physics. Fang was recently awarded a Department of Energy Career Award for her cutting edge work.

The physics field that will be advanced by UFAST studies and documents processes that occur on the timescale of attoseconds, which is one billionth of a billionth of a second. The ability to make measurements with attosecond precision allows researchers to study the fast motion of electrons inside atoms, and molecules, and solid materials at their natural time scale. Measuring this fast motion can help researchers understand fundamental aspects of how light interacts with matter, which can inform efforts to harvest solar energy for power generation, detect chemical and biological weapons, perform medical diagnostics, and more.

UCF already has a reputation in attosecond science.

In 2012 a team from UCF created the world’s shortest laser pulse — a 67-attosecond pulse of extreme ultraviolet light — and in the process gave scientists a new tool to watch quantum mechanics in action. In 2017, the same team beat its own record with a 53- attosecond pulse. It was another breakthrough work at UCF’s Institute for the Frontier of Attosecond Science and Technology (iFAST).

The grant will enable transformational scientific investigations, attract talented students to UCF and attosecond science, and improve the diversity of our future workforce, Fang says.

“In addition to the multidisciplinary nature of its applications, the facility will be accessible to users across the U.S. and from around the globe and will stimulate collaborations across research fields and institutions, as well as between experimentalists and theorists,” she says.

UFAST will not only advance science, but it will give UCF graduate and undergraduate students and postdoctoral scholars access to pioneering ultrafast research and technologies not easily accessible anywhere else.

This new high-power laser will drive the world’s fastest tabletop soft x-ray source of unprecedented power, as well as other highly sought-after light sources in the long-wavelength and terahertz range. These advanced light sources will enable several advanced detection technologies.

“The new infrared laser is unique,” says CREOL and physics Professor Zenghu Chang, a co-principal investigator. “This new laser infrastructure and the light sources it enables at UFAST will strengthen UCF’s excellence in laser technology and bring excellent opportunities to the attosecond science community.”