Professor Sasan Fathpour and members of his research team (Research Scientist Dr. P. Rabiei, and graduate students J. Ma, S. Khan and J. Chiles) have developed a new way of integrating photonic devices that can potentially revolutionize integrated optics for applications in telecommunications as well as nonlinear and quantum optic devices on chips.

Despite decades of research, there appears to be no ideal photonic material that can play the unifying role that silicon has been dominantly playing for decades in microelectronics. For example, some photonic materials (like compound semiconductors) are good for laser light generation, while some (like lithium niobate) are good for electro-optics (an effect useful for switches and modulators). Silicon is a good passive optical material to move light around a chip and there are ways to make modulators on it but the performance of the devices is not great because the material is not electro-optic.

The problem with current lithium niobate devices is that they are bulky and expensive. If thin films of lithium niobate are developed and the geometrical cross-section of devices on the films can be reduced to submicron dimensions, the field of integrated photonics can move toward a more unifying platform. In addition, if such miniaturized photonic devices are made on silicon wafers that already house electronic circuits, ultrafast photonics and electronics can be seamlessly merged. Such a hybrid platform can pave the path toward using optics to transmit data between microprocessors, graphic and memory chips of future personal computers, game consoles, laptops and tablets. 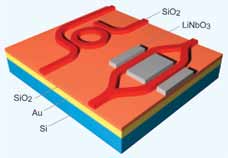 Fathpour and his team’s breakthrough results make such a hybrid versatile platform closer to reality. For the first time, they have managed to bond thin films (less than half a micrometer thick) of lithium niobate to silicon wafers. The films themselves may have applications other than photonics (microelectromechanical systems, microwave filters for cell phones and piezoelectric transducers, to name a few). For now, the CREOL researchers are more focused on demonstrating basic integrated photonic devices such as low-loss microring resonators and high-performance optical modulators. They have managed to demonstrate electrooptic modulators whose driving voltage is several times less than the best commercial devices. This has become possible because the dimensions of the devices are less than a micrometer in width and height, compared to tens of microns in conventional devices. Having smaller devices means less voltage to attain the required radio-frequency electric field for the electro-optic effect, and less real estate on thin films means less consumption of expensive lithium niobate wafers.

Unlike conventional lithium niobate waveguides that can be hardly bent, the UCF researchers have demonstrated optical rings with diameters less than a third of a millimeter for the first time on the material. All of these will allow integrating several miniaturized modulators and other photonic devices on a single chip for advanced communication formats such as quadrature phase shift keying (QPSK).

The advantage of the novel platform is beyond optical telecommunication applications. Lithium niobate is one of the best known nonlinear optical materials but, with the lack of small and efficient waveguides, onlinear photonic chips that can manipulate the wavelength of light and quantum optics chips that allow quantum-mechanical interaction of light and matter have been hard to achieve. It is expected that these nonlinear and quantum optical chips can become a reality in the near future. Fathpour’s group plans to start working on building such chips in addition to pursuing their research on advanced photonic devices for optical telecommunication applications. The work is funded under the Office of Naval Research Young Investigator Program and was published in Optics Express last October.

Sasan Fathpour was among 16 researchers nationwide receiving Young Investigator Awards from the Office of Naval Research in 2013. He was recognized for showing “exceptional promise for doing creative research” early in his tenure track, according to the Navy. Fathpour was awarded a three-year, $680,000 grant to study novel nonlinear integrated devices on silicon. In 2012, he received the National Science Foundation CAREER award (another prestigious award for junior faculty) to conduct research on mid-infrared silicon photonics.

His research at CREOL has been highlighted by Nature Photonics, Optics and Photonics News, Laser Focus World, photonics.com and other trade magazines and professional websites. He is the co-editor of a book entitled “Silicon Photonics for Telecommunications and Biomedicine” published by CRC Press in 2012.