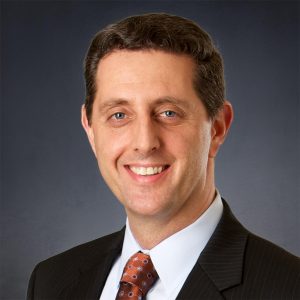 A self-described “experimentalist at heart,” Lawrence ran into plenty of problems in seventh grade when he built a power supply to power a donated HeNe laser tube to explore his curiosity about lasers. Those problems became learning opportunities that led him to eventually assemble more powerful ruby crystal lasers.

His science fair projects skipped the generic baking soda volcano and dove into sophisticated topics like the impacts of monochromatic light on photosynthesis. That opened opportunities like undergraduate study at the Massachusetts Institute of Technology (MIT).

“At that point I was hooked on lasers,” said Lawrence, the 2020 Distinguished Alumnus for CREOL, the College of Optics and Photonics. “I loved being in the lab and solving problems.”

While earning a master’s at MIT, Lawrence traded the classroom for a co-op position at General Electric. The lab work continued, with a focus on nonlinear optics in organic materials. Working with a particular class of organic salts, Lawrence and the team at GE demonstrated some of the largest second-order nonlinear optical co-efficience at the time.  In a corporate research environment like GE Global Research, Lawrence soon came to realize that everyone either had a doctorate degree or worked for someone who did. There was only one solution.

Other schools promised opportunities to study lasers in depth, but it was the laboratory of the late George Stegman, Ph.D., at CREOL, the College of Optics and Photonics that snagged Lawrence.

Under Stegman’s mentorship, Lawrence rebuilt and improved a laser system that fulfilled his ambitions to perform research at the cutting edge of nonlinear optics. He had the opportunity to present his work at numerous conferences, including traveling to Europe to present his findings at an international nonlinear optics workshop, and engaged in spirited academic debates with other researchers in the field.

“I couldn’t have asked for a better experience,” Lawrence said.

Lawrence explains studying for a Ph.D. is fundamentally about problem solving. Often he would start with the desired result and work backwards to find how to achieve it. Because this fits his favorite mode of study, the time flew by and he was soon walking across a stage to add “Ph.D.” after his name.

Over the time it took earn his doctorate, some of his friends at GE had launched a startup. Lawrence joined them and immediately found himself leaning on the problem solving skills acquired over his career, now to develop products for the fiber-optics industry. His career eventually took him back to GE as a researcher and eventually into leadership roles.  These positions then led to his current role as chief technology officer for a medical device company called Hill-Rom.

While today’s role doesn’t take him frequently into the lab, the fundamentals of problem solving remain as valuable. That’s one of the key strengths Lawrence would encourage in rising students, along with the flexibility to explore new opportunities.

“Be willing to push yourself out of a comfort zone,” Lawrence said.