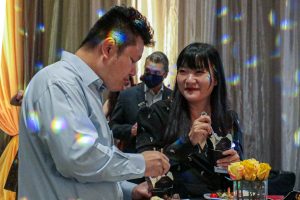 UCF leadership lauded faculty members for being leaders in their fields and conducting work that has had a significant impact on the world.

COVID-19 disrupted plans for the recognition ceremony in 2020 so UCF honored the 2020 and 2021 winners together. UCF President Alex Cartwright, Interim Provost Michael Johnson, Vice President for Research Elizabeth Klonoff and Vice Provost for Faculty Excellence Jana Jasinski were on hand to recognize each winner with glass awards.

Deans, chairs and directors from across the university nominate candidates for the award and a selection committee determines the winners. Many deans and chairs joined previous Luminaries and close friends and family of Wednesday’s honorees to celebrate.

In addition to the glass award, faculty members will be featured on the new Luminary Awards Recognition website launched after the event.

Timothy Hawthorne is a scholar in the field of Geographic Information Systems (GIS). In just six years at UCF, he has accomplished an incredible amount of work that is changing lives. The technology he uses helps identify and locate social problems in communities and then helps those communities use that data to better their own lives and neighborhoods. His field sites include areas in Belize, California and Florida. Recognizing the importance of GIS and technology to conduct science, Hawthorne also launched the GeoBus — a former city bus filled with maps, apps and drones that will bring STEM experiences to K-12 schools. Because of his community work, Hawthorne is also often tapped for keynotes, interviews and workshops, and his work has been featured in local and international news. He has also found time to teach and publish 13 peer-reviewed journal articles in top geography journals.

Yan Lu is a prominent figure in the world of academic finance, recognized both nationally and internationally. Over her past six years at UCF, Lu has published various papers in her field, debuting them in prestigious journals such as the Journal of Finance, Journal of Financial Economics and Journal of Financial and Quantitative Analysis. Her research centers around alternative investments and behavioral finance. Lu has been featured in various media outlets including The Wall Street Journal, CNN, The Economist, CNBC and The Washington Post, among many others. She also is a SunTrust Fellow. Currently, she is studying patterns in the money management field and continues to be a groundbreaking leader in finance.

Christopher Emrich is a nationally and internationally recognized scholar in the areas of social vulnerability, community resilience and disaster equity. He is a member of UCF’s National Center for Integrated Coastal Research. His research centers on identifying and assisting vulnerable populations before, during and after disasters including hurricanes and flooding. Emrich is also a problem solver, focusing on improving community resilience, supporting emergency management decision making, and equitable disaster response and recovery plans. His work in resilience measurement continues to advance knowledge across planning and disaster science disciplines. With over 6,500 citations and $4 million in research funding, he is sharing his knowledge across disciplines and teaching our next generation of scholars.

Helen Huang is a major asset to UCF as a trailblazer in the field of brain dynamics and human locomotion. Her current research is focused on brain and body adaptations – how movement patterns are established and altered. Her promising work has been recognized with an NSF CAREER award, an NIH R01 and about $2 million in research grants as her efforts are paving the way for new rehabilitation devices and practices. Huang is also passionate about our next generation of engineers. She has worked tirelessly to establish a new master’s program in biomedical engineering as well as assisting in plans for a new doctoral program. As a mentor to both undergraduate and graduate students, she constantly inspires and passes on her passion for advancing human locomotion and improving overall quality of life.

With 1 in 54 children in the U.S. diagnosed with an autism spectrum disorder (ASD), the work of Jeanette Garcia and David Fukuda — the 2020 Team Award recipients — is especially important. Uniting similar interests in separate areas of expertise, Garcia and Fukuda make a unique team who work together to design Judo programs for youth with ASD.

Their work, which has received media attention locally and nationally, has linked Judo to better sleep, greater physical activity, and growth in self-confidence among participants in the study. The program emphasizes mindfulness, strength and balance, coordination, and promotes social interaction among youths with ASD.

Garcia’s research focuses on developing feasible and sustainable health promotion programs that will help to instill lifelong health habits in youth with developmental disabilities. She has implemented several community and school-based physical activity and nutrition education interventions to benefit youth with ASD and their families.

Fukuda is an exercise physiologist and Judo expert. Recently, he was named a National Strength and Conditioning Association Fellow for his unabating contributions in the field. As a former national and international Judo competitor, Fukuda’s expertise is vital to creating an appropriate curriculum for youths with ASD.

The strides Garcia and Fukuda have made on this joint study have truly impacted the lives of not only youths with ASD, but their families as well.

Heart disease is the leading cause of death among adults in the United States. That’s where Dinender Singla comes in. His research focuses on heart failure, inflammation, cell death, stem cells and cardiac regeneration. His promising work has generated more than $10 million in National Institutes of Health grants alone. He has published more than 90 journal articles and is a Fellow of the American Heart Association, American Physiological Society, and the International Academy of Cardiovascular Sciences. He serves as president elect for the International Society for Adaptive Medicine. He is well known in the community as a collaborator, which is one of the reasons he was named the Advent Health Endowed Chair in Cardiovascular Sciences, the only basic science chair at the College of Medicine. In this role, he is charged with developing collaborative and translational scientific relationships with the hospitals in Central Florida. His research has also been featured in local and national news outlets.

From lasers that are used to cut Gorilla Glass for Samsung phones to fiber-optic cable technology that allows the internet to operate more efficiently, Peter Delfyett’s work has been making waves for over three decades. Delfyett’s personal contributions to the base of scientific knowledge include 44 patents that apply directly to the advancement of everyday life. As a result of his work, he was inducted as a member of the National Academy of Engineering for contributions to the development and commercialization of low-noise, high-power ultrafast semiconductor lasers. Delfyett’s election to the NAE is a milestone for UCF since it represents the first faculty member at the university to be elected to a national academy for work done here. In addition to his research accomplishments, Delfyett is known as an amazing teacher, mentor, and colleague. One of his strengths is connecting with students and lecturing on difficult subjects they can digest and understand.

Kathleen Richardson is one of the world’s foremost experts in infrared optical glass. Richardson runs UCF’s Glass Processing and Characterization Laboratory where she designs and processes novel glass and glass ceramic materials essential for a wide range of applications and many industries. She led the U.S. delegation bid to the United Nations which established 2022 as the International Year of Glass. Richardson worked with LightPath Technologies to support components for a Mars Mission in 2021. She is not only an expert in her field with more than 250 publications, but she also gives back at every level. From serving on national committees and associations to running a webinar for The Girl Scouts of America Richardson pays it forward every day.

Catherine Kaukinen’s work is related to the field of domestic violence, specifically violence against women. Her research has had a strong impact on policies to protect survivors and to inform public officials on partner violence. Her most recent work explored the relationship between COVID-19 and the incidence and impact of intimate partner violence. What she found led to a commissioned report to the Council on Criminal Justice and extensive media coverage by NPR, CNN, the New York Times and others. Kaukinen was invited to present her findings to the United Nation’s Office on Drugs and Crime conference in June. She has received over $2 million in research funding and is called on as an expert witness in court cases related to violence against women. She also leads UCF’s criminal justice department.

David Poissant is a fiction writer whose books have won awards and garnered national and international acclaim. He is one of the most recognized names inside creative writing circles and in the literary world. His novel, Lake Life, published in 2020, features interlocking narratives from six different characters as they react to an accidental drowning death of a child. It’s been translated into Italian, Spanish, French, German and Czech. It has received numerous awards and recognition. The New York Times named it an Editors’ Choice Selection and the Atlanta Journal-Constitution newspaper named the book Critics Choice: 10 Best Southern Books of 2020.

Tania Roy is a valuable researcher in the realm of nanoscience and next-generation electronics. Her current research is looking at systems that can emulate the capacity and speed of a human brain. This process is aimed at replacing slower, bulkier programs with wearable devices that can monitor health biometrics for the elderly to use at home. Her expertise — she’s published more than 20 journal articles since 2018 — and innovative approach make her a popular conference speaker. Roy has been recognized with an NSF CAREER award as a testament to her high-impact research. Her latest research looks to develop more technology that can replicate human mechanisms. One of these projects includes cameras on drones that can immediately process what they are seeing, like a human eye would. Her cutting-edge work and creativity continue to inspire both novice and practiced scientists today.

Beatriz Reyes-Foster is an internationally recognized cultural anthropologist, whose research encompasses reproductive justice and medical anthropology. Reyes-Foster has published two books with a university press — a gold standard for her field. The prestige she has gained in her field has led her to opportunities to raise awareness about the importance of mental health and trauma in ethnographic field work. She’s also served as an expert witness during immigration proceedings on behalf of several mentally ill patients facing deportation to Mexico. Her work is influenced by social justice, and how our current framework affects different populations.

Lisa Mills is an award-winning film maker who teaches screenwriting, documentary production, film theory and media history. Her achievements have brought UCF national and international recognition. She has directed or co-directed 16 films over the past 13 years and has won 37 awards. One of her most recent documentary films, Marching Forward, aired on public television stations including WUCF TV. It tells the story of unity in 1964 segregated Orlando when two high school marching bands — one Black and one white — were invited to perform together. This film alone has won eight awards.

Peter Hancock, College of Sciences, and Institute for Modeling and Simulation

Peter Hancock is a world-renowned expert in the field of ergonomics and human factors — particularly in the areas of stress and cognitive workload. His work focuses on human interaction with automation and autonomous systems, such as trust effects associated with human-robot interaction. Much of his published work has resulted in several now classic works that form the standard references in the area. Hancock was also recently honored as one of UCF’s first faculty members to be elected to the National Academy of Kinesiology. Hancock has been awarded 175 grants and contracts worth $21.6M, with $13.5M of this since his arrival at UCF, and $2.3M since 2016.