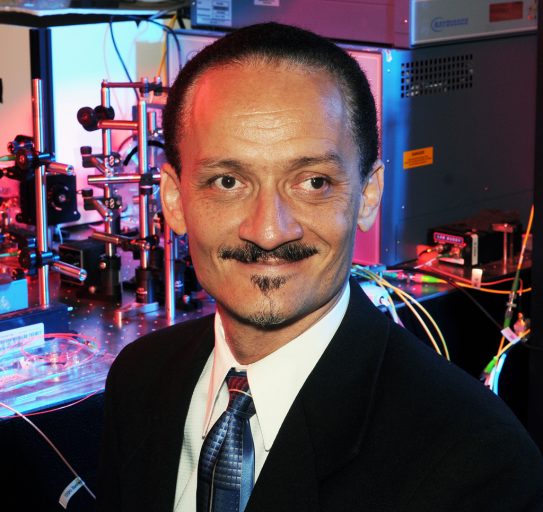 Video conferencing has kept the remote workplace humming during this year’s pandemic, and it was made possible through the work of researchers like Peter Delfyett, Ph.D., the 2021 winner of the prestigious Arthur L. Schawlow Prize in Laser Sciences.

Specifically, Delfyett, a Pegasus Professor of optics and photonics, studies the application of semiconductor lasers to fiber optic communications — the key component of programs like FaceTime and Zoom.

“It is the backbone of the internet,” said Delfyett, who joined the UCF College of Optics & Photonics in 1993. “This is a very relevant time to receive this award as we are all very dependent on these applications during the pandemic.”

Each year, the American Physical Society selects one scientist who has made outstanding contributions in laser science research to receive a cash prize and certificate of cited contributions to the field. The award is named after Schawlow, a Nobel laureate and co-creator of the laser.

“I was shocked when I first heard that I received the award and then immediately humbled,” said Delfyett. “To be recognized by your scientific peers that aren’t only peers, but competition as well…to me that is the highest achievement possible.”

Currently, Delfyett is working toward overcoming “Moore’s Law,” which states there is a limit to how small transistors can shrink in size. Contemporary research has brought transistors down to a couple hundred atoms in size, but Delfyett is convinced there is a way to transcend this barrier. His lab’s goal is to combine photons and electrons to continue increasing the processing speed of electronics.

Their target: photo-electronic circuitry than can process about 1 million Netflix channels on a semiconductor chip about the size of a fingernail. This would have immediate applications in data centers throughout the world.

Delfyett will receive $10,000 with this current award to celebrate his contributions to the field of physical sciences.

“Science gives to me a feeling of inspiration that I hope to instill on my students,” said Delfyett. “By engaging in science, you have the opportunity to discover things that have never been discovered before, and that is what motivates me to keep on with my research.”