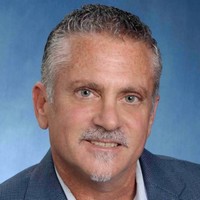 Richard DeSalvo, Ph.D. ‘93, takes wireless communications further into the future every day, but it’s the people of his past that inspire his every step — beginning with Neil Armstrong.

DeSalvo credits the 1969 moon landing and his mother for steering him toward the sciences in general, but it would take years of starts and stops before he settled on his true passion. In high school it was marine biology, then dabbling with computer programming and astronomy at the Florida Institute of Technology.

“Watching the reflection on the ground, the dust particles scattering in the air…it immediately changed my track. I thought ‘I’ve got to know how this works,’” DeSalvo recalled.

The field of photonics was still in its infancy in 1985, but optics and physics were both available majors at Jacksonville University. Under the guidance of Professor Steve Browder, Ph.D., DeSalvo wrapped up his bachelor’s degree three years later, and started hunting for a place to begin his terminal degree. He settled on a brand-new program at a little school in Orlando called the University of Central Florida.

DeSalvo was in the inaugural CREOL class of about eight graduate students developing laser projects in laboratories on Research Parkway. It was a “pathfinder program” as DeSalvo puts it now, but he thrived in the start-up atmosphere.

“They gave me wings and I just took off,” DeSalvo said.

DeSalvo’s gamble paid off. He pursued research in non-linear refraction and two-photon absorption under the direction of his co-advisors, Professor Eric Van Stryland, Ph.D., and Professor David Hagan, Ph.D. The research focused on using the Z-Scan method to measure the anisotropy and dispersion of the nonlinear refractive index in dielectric materials, including non-centrosymmetric crystals used for harmonic generation.

When working with potassium titanyl phosphate (KTP), DeSalvo “stumbled upon” the cascaded second-order effect, which was first theoretically described in the early 1960s by Nobel laureate Nicolaas Bloembergen, Ph.D. This work resulted in a seminal paper, “Self-Focusing and Self-defocusing by Cascaded Second-Order Effects in KTP”, R. DeSalvo, D.J. Hagan, M. Sheik-Bahae, G. Stegeman, E.W. Van Stryland, and H. Vanherzeele, Opt. Lett. Vol. 17, 28-30, (1992). This paper was one of the top 25 cited papers in the Optical Society of America’s Optics Letters, and has redefined the field of cascaded second–order nonlinear optics as described in the following article, “The Impact of Optics Letters on Science and Technology”, Optics & Photonics News, Vol. 7, 34-42, (2002).   Fundamentals in this paper led to the theory and development of spatial optical solitons and many other new phenomena.

He was shocked when Bloembergen visited campus and decided to drop by his dissertation defense. Already nervous walking into this career-defining moment, DeSalvo now had to keep calm and explain his research to the man who first proposed the theories.

“My heart’s about to jump out of my chest,” DeSalvo recalled.

The presentation went off without a hitch until Bloembergen asked a question.  Bloembergen agreed with everything presented, except for DeSalvo’s hand-drawn acetate of the experimental set-up, which showed photons traveling from right to left.

Bloembergen gravely stated that, “photons only travel from left to right, never the other way.” DeSalvo stood there dumbstruck: “It felt like time was frozen and I had absolutely no idea how to address Professor Bloembergen’s statement.” It was then, MJ Soileau, Ph.D., CREOL’s first director, hollered out, “He’s just messing with you, DeSalvo!”

“Everyone had a good laugh,” DeSalvo said, who can laugh about it now. “That was a moment I’ll never forget.”

DeSalvo built a successful career out of his degree, ultimately settling in his current position with L3Harris Technologies, where he is a Senior Scientist and Fellow in the Photonics Department. DeSalvo leads research and development and applied programs in microwave photonics and lightwave communication systems.

DeSalvo finds the work itself rewarding and exciting, but what he enjoys even more is training the next generation of innovators. It often takes a year or more for new hires to gain their security clearance, so DeSalvo spends time with them in the unclassified laboratory teaching them about optical communications and signal processing.

He strives to be the same kind of mentor and carry the same impact as all the people who changed his life throughout his academic years and into his careers at both JDS Uniphase and L3Harris Technologies.

“Paying it forward is the best way to put it,” DeSalvo said. “That’s one of the happiest parts of my career.”

In addition to his career growth, DeSalvo has published over 30 refereed journal publications, invited articles and conference proceedings, and holds 32 US patents in the fields of telecommunications, radio frequency photonics, and biophysics.  He is a Senior Member of the Institute of Electrical and Electronics Engineers, and was appointed the position of Graduate Faculty Scholar in the College of Graduate Studies at the University of Central Florida in 2009 and Adjunct Professor within the School of Electrical and Computer Engineering at Georgia Tech in 2013. DeSalvo serves on the technical planning and program committees for IEEE AVFOP, the Annual IEEE Photonics Society (IPC), and IEEE MTT’s MWP.