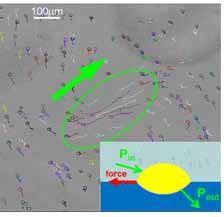 Due to negative forces, surface-bound droplets move opposite to the directio of illumination. After Nature Photonics 7, 787 (2013).
Light induces mechanical action in different ways. When energy is exchanged, both light and material properties may be altered leading to a variety of movement or propulsion mechanisms, such as phototaxis or photophoresis. Light also carries linear and angular momenta that can be transferred directly to matter. This permits controlling microscopic systems with extreme precision. When light interacts with more complex media, new manifestations of optically-induced forces occur. Professor Aristide Dogariu and research scientist Sergey Sukhov have recently shown that gradientless light fields can, counterintuitively, exert pulling forces in complex multiphase systems. These forces arise naturally when the properties of the electromagnetic fields can be carefully controlled. Remarkably, this happens in purely passive dielectric environments and without resorting to complicated illumination beams or the use of exotic materials (Nature Photonics 7, 24, 2013). What’s more, the electromagnetic momentum can be practically amplified when light propagates from one medium into another with higher refractive index. As a result of linear momentum conservation at interfaces, a new type of mechanical action is generated at the interface between homogeneous domains. This phenomenon leads to negative forces which point against the main flow of light and can act on arbitrarily large objects causing very large displacements, as demonstrated by research in Professor Dogariu’s group (Nature Photonics 7, 787, 2013). This discovery should not only drive the development of microscopic theories of electromagnetic forces in soft bodies but it may also have significant technological applications. The new way to generate optically-induced action is easy to scale, simple to implement and robust, and it can open fresh avenues in optomechanics, optofluidics, or microman ipulat ion. For instance, one could imagine these types of forces driving microflows without moving parts or other additional mechanical or chemical preparations. In conjuncture with other external fields (thermal, chemical, etc.), the optically controlled dynamics could assist in establishing a range of steady-state nonequilibrium situations in complex fluids. Based on such electromagnetically induced surface forces one can develop new tools to explore fundamental interfacial phenomena in biology and colloidal science. For example, complex fluid-fluid interfaces are common to many living systems, environment, chemically engineered products, etc. These structures are created when active molecules or particles collect at interfaces; they couple strongly to hydrodynamic forces and have nonlinear rheological properties. The flexibility of applying spatially distributed stresses could lead not only to novel interfacial microrheology techniques but also to new means for macroscopic manipulation of such structures described by complex constitutive relations. 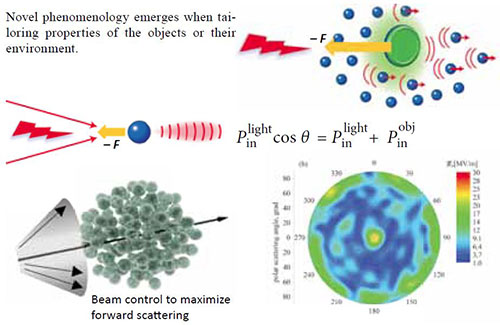 The wavefront of incoming radiation can be controlled to induce “negative” forces acting on complex objects.
There are more distinctive consequences of strong light-matter interaction. For instance, the interplay between Brownian motion and optical forces generates unusual mechanical properties and provides unique insights into out-of-equilibrium phenomena. Professor Dogariu’s group was the first to demonstrate that light interacting with colloids can serve as a model for a different type of matter (Nature Photonics 6, 834, 2012). The unique properties of such “active matter” are derived from the additional energy imparted to system’s constituents and, as a result, the medium is out of the equilibrium and displays unusual collective behaviors. Biological systems are certainly archetypical examples of active matter that span many length scales from the transformation of cytoskeletal filaments at subcellular levels to swarming of bacteria to complex motion in animal groups. This artificial all-optically controlled “active matter” enables unique studies and brings new insights into the fundamental properties of complex biological systems. In addition, the colloidal active matter may also open avenues for creating synthetic materials that could mimic properties of living matter.