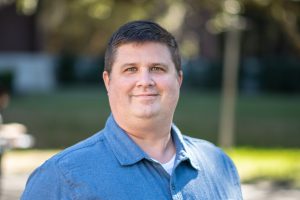 A retired Army officer and Ph.D. candidate within UCF CREOL is using his unique experience with the military to further advance the future of military combat vehicles.

Grimming spent time working multiple positions in the Army, including logistics, explosive ordnance disposal and nuclear operations. One of his proudest moments was becoming an assistant professor at West Point where he taught for three years.

“Teaching at West Point was a unique experience that I don’t think can ever be matched,” said Grimming. “It was an honor working with such a diverse group of students motivated to excel in every aspect of their lives and contribute to their nation.”

Retiring from the military brought Grimming to Orlando, where he began teaching at Wekiva High School in their magnet program for laser photonics.

This program was dual-enrollment and, at the time, one of the only ones to allow students to receive a college-level education in optics while in high school.

“Through my teaching experience, I have benefitted from not having to look back and wonder what advice I’d give myself as a student,” said Grimming. “I have been providing that advice to my students for years. You won’t have choices later in life if you don’t make options for yourself now. Second, math and science aren’t just for ‘smart kids.’ It isn’t as hard as you tell yourself.”

Grimming left his program with Wekiva to pursue his Ph.D. at UCF CREOL, focusing on infrared imaging systems that will be directly applied to military optics. This includes developing LIWR applications for autonomous vehicle navigation used to further military vehicle technology.

“I chose to study this aspect of optics because I believe that working on future technologies that will benefit our armed forces is very rewarding,” said Grimming.

Being a part of both the Knights Vision lab and the Electro-Optical Infrared Systems group at CREOL reminds Grimming that science is something that can inspire anyone.

“People think that the math and sciences are challenging because it isn’t something that we use every day,” said Grimming. “But being a part of CREOL reminds me of why I enjoy it so much.”