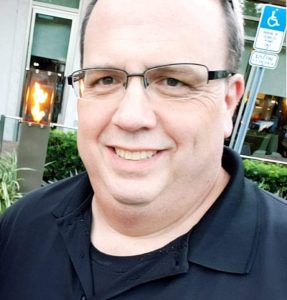 A deep knowledge of wave band sensors and a sturdy pair of hiking boots are both important to Roger Rose’s job.

A self-described “underachiever” in high school, Rose ’21 MS failed intermediate algebra three times in community college. Realizing he needed a change, Rose made a life-changing decision and moved to Tallahassee Community College. There he met a math professor who changed his trajectory. Her faith in his capabilities paired with a clear, understandable teaching style gave him the focus he needed to succeed. Rose aced her class and eventually worked alongside her as a teacher’s assistant.

“I didn’t have many aspirations or a long-term plan before then,” Rose said. “This drove toward me the sciences.”

He started in electrical engineering at Harris Corporation, fine-tuning and innovating complex integrated circuit designs for airborne systems.  That position was a launchpad into developing night vision systems for related roles over the following decade and into his current job as staff systems engineer at Lockheed Martin.

In this senior role, he serves as the bridge between the drawing board and the hard rules of physics. The teams he supervises are approached with a concept like how to find a specific target on land or sea under certain weather conditions. His team jots down ideas, builds a prototype, tests it, corrects failures, refines, then ultimately delivers a marketable product.

Much of the work happens bent over a laboratory bench or in front of a whiteboard, but field trips to test ranges are common, too. Rose recalls one particularly eventful test when a hurricane skirted his position at Eglin Air Force Base on the Florida Panhandle.

“High boots and rain coats are particularly useful in this job,” Rose said.

A second Master’s degree from UCF CREOL, College of Optics and Photonics, started three years ago when professors offered to hold classes once a week at Lockheed Martin. Those classes continued uninterrupted virtually over the pandemic, eventually resulting in Rose’s graduation this spring.

Rose brought close to 20 years of experience in electrical engineering to the classroom, but he still found himself learning. In some cases it was new, more efficient ways of doing established habits and routines.

“I’ll have a very brute force way of doing things sometimes. It’s accurate, but I learned some tricks to get me where I needed to be much more quickly,” Rose said.

It particularly strengthened his understanding of optics and allows him to now talk on a more level playing field with the Lockheed Martin optical design engineers.

“I like to predict things mathematically, then see them appear in real life,” Rose said. “This (degree) improves my ability to predict those outcomes.”