Newton’s third law states that the action-reaction forces involved in an elemental two-body interaction must be equal and opposite. Combined with the second law of motion, this implies that two classical bodies are expected to accelerate either towards or away from each other, but never in the same direction. This is true as long as the masses of the two particles involved are positive, which is of course the case in mechanics. However, this situation completely changes if hypothetically one of the masses is negative. In fact, in this regime, an intriguing scenario arises whenever the two masses are equal and opposite; under these conditions, two interacting bodies will indefinitely accelerate in the same direction while keeping a constant distance among themselves Interestingly, this possibility was first speculated within the context of “diametric drive” that could itself provide a possible mechanism for space propulsion. Of course, in the absence of negative mass particles, no such acceleration behavior that breaks the action-reaction symmetry has ever been reported.

In a recent study (Nature Physics, 9, 780 (2013)), the group of Prof. Christodoulides in collaboration Prof. Ulf Peschel’s team from the University of Erlangen-Nuernberg in Germany, have demonstrated this effect using optical pulses in a figure-8, fiber-optic platform (Fig. 1b). This periodic arrangement ultimately leads to two photonic bands. Given that the effective photon “mass” in these two bands is equal and opposite, one could then anticipate optical diametric drive acceleration effects to take place. To excite such a selfaccelerating bound state, two pulses (having opposite masses), were launched in close proximity to each other. The interaction force between these wavepackets was provided by means of Kerr nonlinearity. The formation of such a mass/anti-mass self-accelerating state is shown below. In all cases, this combined entity perpetually accelerates towards the direction of the negative-mass component until relativistic saturation effects from the band edges come into play.

The underlying concept presented is quite general and can be directly apply to many other physical settings. Given that the effective mass is a generic concept in physics, diametric drive effects can inspire new approaches in controlling particle interactions in crystal lattices. The demonstrated reversal of actionreaction symmetry could also enable new possibilities for frequency generation and pulse steering applications, as in advanced laser systems or during supercontinuum processes in photonic crystal fibers.

Along similar lines, optics may serve as a powerful test bed for another physical phenomenon, the so-called supersymmetry (SUSY). This concept was originally conceived in the context of quantum field theory as a means to treat bosons and fermions on an equal mathematical footing. As recently indicated (PRL 110, 233902 (2013)), transferring SUSY notions to photonic settings turns out to open a number of interesting possibilities. These include for example, global phase matching of an arbitrary number of guided modes that would enable the direct manipulation of individual modes in heavily-multimoded systems. Furthermore, supersymmetry can endow two apparently dissimilar structures with identical scattering characteristics and thereby render them indistinguishable to an external observer. 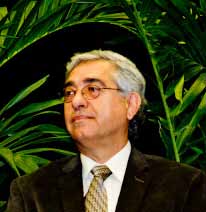 Demetrios Christodoulides was named UCF Pegasus Professor this year. His research has produced a number of breakthroughs for which he has received international recognition including the prestigious OSA R.W. Wood Prize. His work also has attracted international media coverage from the Sunday Times-London to MSNBC.