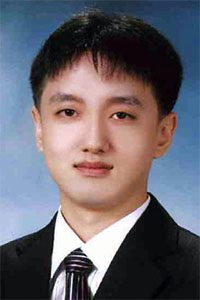 Myungkoo Kang earned his Ph.D. degree under the supervision of Professor Rachel S. Goldman in the Department of Materials Science and Engineering at the University of Michigan in 2014. During his Ph.D, he extensively studied the influence of energetic ion beams on a wide range of III-V compound semiconductors at the nanoscale and demonstrated the counterintuitive self-assembly of novel nanostructures arrays with arbitrarily tunable dimensions. He systematically characterized localized surface plasmon resonances of ion irradiation-induced Ga nanoparticle arrays with performance comparable to those of Ag and Au nanoparticles, and demonstrated Ga nanoparticle plasmon-induced enhancement of light emission from GaAs up to 3.3X, which is the first ever combination of a new plasmonic material (Ga) and a new fabrication method (ion beam) for plasmonics. He continued his academic career as a post-doctoral research fellow under the co-supervision of Professor Theresa S. Mayer in the Department of Electrical Engineering (currently vice president for research and innovation at Virginia Tech) and Professor Carlo G. Pantano in the Department of Materials Science and Engineering at Pennsylvania State University. During his tenure as a postdoctoral research fellow, he developed and demonstrated a new laser exposure-based process for gradient refractive index fabrication using multicomponent Ge-As-Se-Pb thin film and bulk systems with high Pb content that provides an opportunity for next generation mid-wavelength infrared lenses. Using spatially-controlled ion and laser irradiation processes and cutting edge material/optical characterizations such as high-resolution transmission electron microscopy and spectroscopic ellipsometry, he is striving to understand how energetic ion and laser irradiation processes can be optimized on a wide range of semiconductors and glass systems to efficiently create novel nanocomposites with spatially-tunable nanostructure dimensions and desirable properties that are promising for next generation plasmonic and transmissive optical devices, respectively.